Faith and Hope To Change Our World 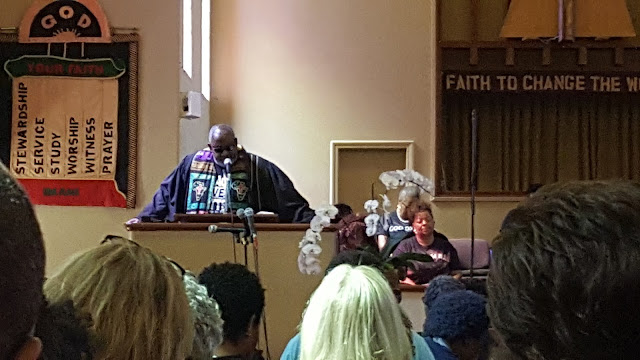 July 4th launched what was supposed to be a week of celebration in America, ended after three days of unforgettable tragedy. On July 5th the world witnessed the senseless death Alton Sterling, an African-American male in Baton Rouge, Louisiana selling music CD’s outside a convenience store. July 6th before the media, Quinyetta McMillian who was the mother of Alton’s five children stood emotionally ripped with their fifteen-year-old son Cameron the oldest child who was so distraught that he covered his face sobbed and eventually collapsed into the arms of an older man who stood behind him. I was angry at the thought of Eric Garner who was killed for selling loose cigarettes. The news was too upsetting. These two men were fathers in a country that does not entitle African-American males to economic justice. Like many black males, they earned income from meager hustles of cigarettes and CDs.

In less than twenty-four hours, the two-days of recorded tragedy witnesses by the world left most of us in shock and in detrimental anguish to the point of hostile anger, my gut knotted and my heart was ripped apart at the evening news at yet another inexcusable death of an African-American man in St. Paul, Minnesota. Philando Castile, an innocent man was shot four times by police while sitting in the front passenger seat of a vehicle as his girlfriend Diamond Reynolds sat in the driver’s seat streaming in real-time on social media. The world watched him bleed to death and take his last breath as Reynold's four-year-old daughter sat in the back seat of the targeted vehicle just inches from the discharging fire arm. Not only was this further evidence of how black and people of color are treated in the hands of police officers, but it speaks to the systemic racism, often inexcusable brutality and extreme violence that have heightened levels of distrust towards police departments since the beating of Rodney King. July 7th, again the world watches the news as media captures another torrid visual account of a shooting. The two incidents were too much to take-in. Sitting on my couch safe inside in Oakland, California, I thought of all the victims in recent years, Oscar Grant, Trevon Martin to name a few. I watch the news in horror and wept.

July 7, 2016 – people are protesting in cities across the nation, including Oakland. Later that evening the news reported that a lone sniper gunman targeted white police officers at a protest in Dallas killing 5 and wounding 11. The sniper was 25-year-old Micah Johnson, a former army reserve and 6-year veteran who served in Afghanistan. Johnson had succumbed to severe hatred citing in a written statement that he was retaliating and wanted to hurt white people and white police office in particular. He already gave up on life. Johnson's actions were an extremist suicidal warfare tactic driven by hatred and retaliation similar to the incident in 2013, when former Los Angeles police officer Christopher Dorner, both with a mission to kill as many white police officers. Dorner was a Political Science graduate from Southern University of Utah also served in the military as a Naval reservist. Micah and Donner, both African-American males were driven by similar motives of racism may have suffered from extreme forms of PTSD, (Post-Traumatic Syndrome Disorder) combined with other disorders' namely Post-Traumatic Slave Syndrome at the highest and more critical stages that can result in psychosis of disabling hatred followed by violent behavior. This recognition is absolutely not an excuse for violence towards police officers or anyone. However, we should not become negligent to any extreme signs or trigger of hatred caused by racism or rant coming from someone.


Sunday July 10, 2016, I visited Imani Church in Oakland for the first time to be with people in the heart of the community and to help restore my faith and hope in humanity. Like protesters, I too felt outraged upon the deaths of the two men but deeply saddened by all the deaths and violence. Dr. George C.L. Cummings, Senior Pastor told the congregation that he was lost of words, as he sniffled throughout. He announced, “I cannot not stop crying. Today, we are not going to have our usual service. We are taking our faith beyond the church walls and walk in unity to protest against police brutality and murder of black and brown citizens.” After the tithing, band began playing and the church the choir stood clapping in unity and singing in harmony “What’s Going On.”

I ask, which is the more dangerous occupation: A black male selling loose cigarettes and CDs, or police officer? Is this what we want young Cameron to think or the four-year-old daughter of Ms. Reynolds to fear the sight of a police officer because it is associated with imminent death? We have to save our children and leave them with hope for the future. We need to stop all forms of racism, bigotry and economic injustice to avoid our children from suffering from future Post-traumatic slave syndrome.

The congregation of black and white, young and old gathered outside most wearing tee shirts and carrying signs that read 'Black lives matter' walked in unisom down Mac Arthur Blvd in peaceful protest.

Posted by Redd Sonja at 7:56 PM No comments: