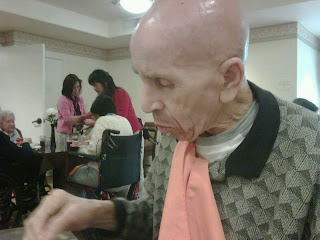 Through the good times and the hard times, it is really tough in dealing with an aging parent alone. My father, Cliff has had several misfortunes in recent years. In his sixties, he became a dementia and Alzheimer patient. To compound matters his health took a turn for the worse at the beginning of this year when a sore on his toe would not heal.

As the legal conservator of my father, I have faced a host of concerns that are at minimal very challenging; but when I had to make a critical decision to approve amputating a limb I was overwhelmed. For four weeks, my dad was a hospital patient at Kaiser in Oakland. Although he has dementia, I know in my heart that he was fully aware and frightened about his condition. The hospital made a decision to keep him restrained throughout his stay because he tried to leave on several occasions. Needless to say, Cliff became very depressed refusing to eat and losing color and suffering from poor circulation.

Following the surgery, the surgeons and therapist in the hospital had written Cliff off. The inpatient social worker and case manager urged to place him in a full care nursing facility because they believed that he would not be a candidate for a prosthesis or therapy. They did not believe he would recover from the surgery, could not feed himself or do anything. The social worker said that they had to release him and he would have to find a place by the week’s end. This was very upsetting to me and it was all too clear that the hospital is focused on turn over; too busy processing patients in and out that there is no time to ‘understand’ or take in consideration the special needs. I was devastated and had all but given in to the social worker’s suggestion. However, when I spoke to Dinah Means-Bailes E.D. at AgeSong, she began to advocate on Cliff’s behalf as did Linda and Janice and everyone.

During his hospital stay, interns from AgeSong went to visit him. Just like a family member, Cliff would become very happy because his eyes lit at the sight of the interns. This was a good sign for him. By the following week, Cliff came home to AgeSong! His beautiful eyes lit up upon entering the foyer and he smiled to see the familiar kind and loving faces that joyously welcomed him back home.
I am so happy and pleased to know that my dad is in a caring a loving place. AgeSong at Lakeside Park has the most wonderful and genuine and attentive staff. Not only do they care about the residents, they care about the families too. They are the only family that Cliff and I have in the Bay Area and we are so thankful to everyone at AgeSong at Lakeside Park Lakeside.

In closing, while hospitals such as Kaiser that operates on such large scales with processing tens of thousands patients in one day the services are less and less personalized and more focused on profit generation; it is pleasing to know that assisted living make up in the care that hopitals lack. I want to thank everyone for helping us through this very difficult period. I know that Cliff loves and thanks everyone as I do.
You guys are the best!
Posted by Redd Sonja at 10:16 AM No comments: